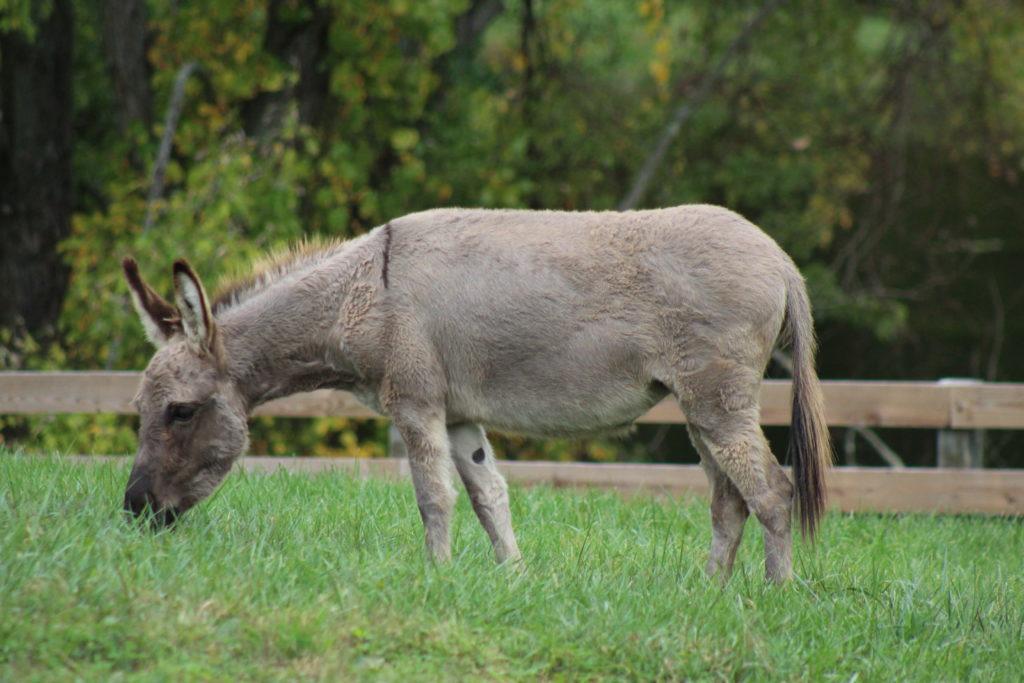 Xena was a yearling when we rescued her, her mother Stella, and an unrelated donkey, Angie, from the New Holland, PA auction in October 2016.  Xena accidentally – and fortunately – was run through the ring as a baby “jack” with a horrible leg injury.  We say “fortunately” because, due to her awful injury and the fact that everyone thought she was a jack, we were able to get her easily and keep her out of the dealers’ hands.  Xena’s leg was horrific. After we got it cleaned up and bandaged for the immediate care, x-rays revealed a wire deeply embedded in her leg. It had been there so long that the skin was healing over it, and the bone had even begun to remodel around it. Her extensor tendon was ruptured; even though she could hobble, her leg dangled when she picked it up, and she didn’t have much control over it. She was amazingly tough, and somehow had survived this terrible injury for many months. She had surgery at the Marion duPont Scott Veterinary Medical Center in Leesburg, VA to remove the wire, and has made an incredible recovery.  All the vets involved in her care said that she had youth and the fact that she was a donkey on her side. Tough and smart!

Xena still has some scar tissue and her leg will probably always be bigger and thicker where the injury was, but she is 100% sound, comfortable and running around, playing and enjoying life like a young donkey should!  Though she was terrified of us when she arrived, all the TLC she received while we cared for her leg has taught her that people are pretty good! Read more about her story as one of the “Three Auction Jennies.”