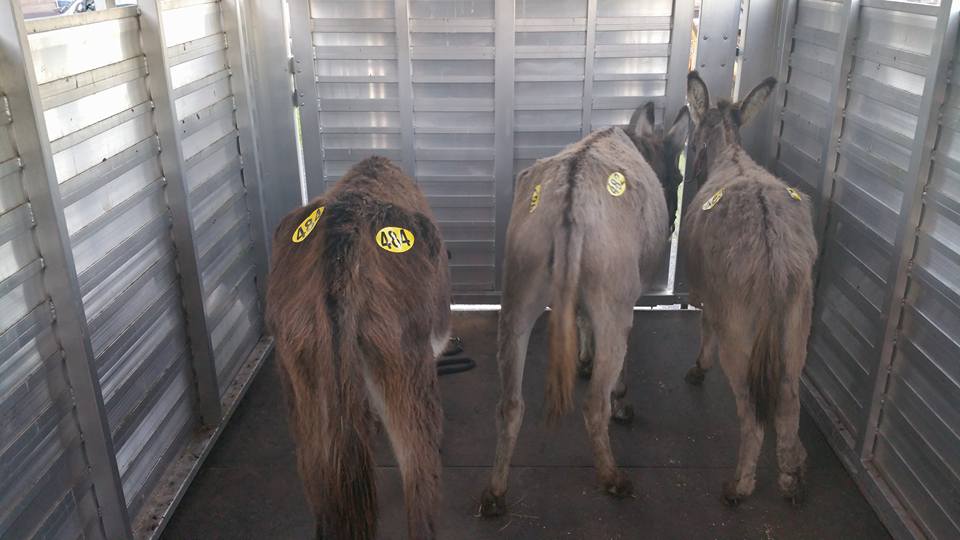 Social media is a fantastic way of spreading awareness and identifying any animal in trouble. If you see or know of any miniature donkey in need, please pass that information on to us.  We will help in any way we can.  If you see a donkey in need of a better situation (such as auctions, CraigsList ads, bad neighbors, etc.) and you can gain LEGAL ownership of the donkey and wish to surrender it to us, we can usually accept them.  But please contact us first just to be sure we have space.

Why rescue miniature donkeys? Do these guys really need our help?

It’s easy to see why people fall in love with these cute, adorable little guys. They are kind and sweet, gentle and playful. They are basically very easy and fairly inexpensive to care for. They make great pets and wonderful companions for other equines.

However, people forget that donkeys can live upwards of 40 years, and having one is a lifelong commitment. As pets for children the novelty often wears off, leaving them forgotten in the pastures. They keep weight on with very little to eat, but their feet often go completely ignored for years, leading to long, curly, disfigured hooves, causing pain and lameness. Lack of good dental care results in sharp, painful teeth, eventually leading to difficulty eating. Though these guys are stoic, tough little survivors, that does not mean that they don’t suffer when neglected.

In these difficult economic times, people often cannot afford to geld their Jacks (intact, male donkeys), leading to herds that grow bigger and bigger with no plan to slow down the over-population. This leads to more and more unwanted donkeys. We have seen mini donkeys advertised for sale on Craigslist, and can see in the photos that some of these donkeys are living in less than ideal conditions, with long, overgrown hooves. And these advertisers claim to be good breeders! Don’t get us wrong, we aren’t saying all the breeders out there are bad. In fact, there are many very good, reputable miniature donkey breeders, who breed selectively, provide excellent care, and promote education and awareness for these little guys. We just want to help slow down the excess and irresponsible pasture breeding that leads to far too many unwanted and poorly cared for donkeys.

We see many of them go to the auctions selling for ridiculously low prices. This leaves us wondering whether they are going to good homes, or ending up in the hands of unscrupulous buyers and possibly ending up going to slaughter houses in Mexico or Canada (YES, even minis can end up being sold for meat, often to feed zoo animals)!

Lastly, we realize that many people simply cannot afford to care for their little donkey any longer for whatever reason, and we want to provide a resource for people to be able to surrender their donkey to us, knowing we will work to adopt them out to a loving home.

Why we buy Donkeys at Auction

Whenever we rescue donkeys from the auction, we get lots of questions about slaughter, and whether these guys are in danger of shipping or not, so we thought we would help clarify a few things. First of all, if you have ever been to auctions like New Holland (PA), you would not wish that experience or environment on any equine. It’s noisy, and scary, and most of the animals brought there are not show animals who are used to traveling often to new places. For many of these equines, just getting on a trailer and shipping anywhere is terrifying. Then, once they arrive, they are handled very roughly by most of the people working there, either tied up, or thrown in pens with animals they don’t know, and subjected to tons of people looking them over, touching them, trying to catch them. Because the animals are scared, they don’t necessarily behave, and because the workers there are in a hurry for everything, patience is not one of their virtues. And as any donkey lover knows, the more scared a donkey is, generally, the more they shut down. This trait alone, subjects donkeys to extremely rough handling with men pulling, dragging, hitting or using cattle prods to get them to the ring if they don’t lead well. This part alone is one of the most hearbreaking things we observe.

Back to the question of slaughter. It is probably unlikely in this part of the country (east coast) that the miniatures would ship for slaughter, they are just too small. But in other parts of the country, like Texas for example, we have heard that truckloads do ship, because it’s a lot more cost effective, they are much closer to the Mexican border. But, that does not mean that a kill buyer could not, or does not collect a bunch of donkeys and sell them to someone who will ship them to Canada, we just aren’t sure. We ARE sure that standard donkeys will ship, they are at the most risk of all the donkeys. That being said, just because these little donkeys might not ship to slaughter does NOT mean that they aren’t in need of a better situation.

There are WAY too many backyard and irresponsible breeders out there, just producing WAY too many donkeys.There simply are not enough good homes for all the donkeys being produced. They bring donkeys to the auction all the time, and dealers and brokers, buy them, and turn around and ship them to another auction. It is not uncommon for animals to go to 2 or 3 auctions up here, all within a week. That’s what these dealers do!

Most of the donkeys we purchase at the auction are extremely thin. Do you know how hard it is to get a donkey thin?!!!! The kind of neglect it takes to starve a donkey is mind boggling! Most (but not all) are not used to being handled, and of course don’t like, or won’t allow us to touch their feet. Many of the donkeys we take in have to go through months of rehab with us, just to get used to being handled and learn that humans can be a good thing. And all of them seem to go through a period of almost “shock” once we get them here from the auction. They shut down, and are just extremely quiet, they hardly eat, and generally just seem completely stunned. Donkeys are such sensitive animals, it can take them weeks once they are here to finally come

out of their shell, and start to seem comfortable with us.

So, while slaughter might not be the cruel fate these miniature donkeys could face, we don’t pull them from the auctions ONLY to prevent them from shipping. For example, the little jack we pulled this week turned out to be blind in one eye, and we are sure nobody knew or cared about that. We pull them to give them a new life, to take care of their physical and emotional needs, and to hopefully, make sure they will NEVER be neglected or abused again.
Below are some photos of the conditions of some of the donkeys and a couple of the ponies who have arrived at our rescue. This is why we are here!

"The least I can do is speak out for those who cannot speak for themselves." ~ Jane Goodall