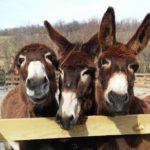 In July 2016, we were in PA doing a home visit for a potential adopter. On our way, we passed by a pasture with 5 big donkeys that were clearly a mess! The weeds were so tall in the pasture that we could not see their feet clearly, but the dilapidated condition of the property and the matted fur hanging off some of the donkeys assured us that their hooves were likely in terrible condition. We could not get close enough to really see their feet, but we did see them walk, and we could tell by their exaggerated movements that their hooves had to be long and overgrown.

We were able to get a phone number and called to offer our assistance with the donkeys, but the owners hung up on us. The very next day we called animal control, and their officer went out promptly and spoke with the owners, who admitted that they could no longer care for the donkeys properly, and hadn’t had their feet worked on “in a while.” Luckily, they agreed to surrender all the donkeys, and within a couple of days, LAPS (Large Animal Protection Society) in PA was sent out to pick up all of them. They remained in the care of LAPS for a few months.

We stayed in contact both with the animal control officer and LAPS because we felt such a connection to these beauties. Several months later, they reached out and asked if we could take these donkeys into our care.  We had to wait for some room here at the “Inn” to open up, and accepted some of them shortly afterwards. We started out taking the three younger geldings, but there were two more, older and foundered, at LAPS that had to wait until we could bring them here later. LAPS took great care of them, and their awful feet finally began to get under control, though they still needed some improvement. Their hooves were so bad that it took a long time to develop new growth and shape their feet.

These boys were around the ages of 9 and 10 when we got them, and they did not know much. They sort of knew how to lead (if it was somewhere they wanted to go), and they were friendly. In addition to their general lack of handling, they were nervous about having their legs handled, bodies brushed, hooves picked, etc. It’s going to take a while, but they are big gentle giants and are a beautiful, unique addition to Little Longears.

We mentioned that there were two more mammoths in this group, older and foundered, who remained at LAPS until we could bring them here.  Big Clyde was one of the two, and he remained in the care of LAPS for several more months until we had room for him. (The other was a jenny, and LAPS found a home for her.)

Big Clyde was somewhere in his mid-to-late 20s, and foundered pretty badly at some point in his past.  He has an old injury to one of his stifles, and has arthritis in both hocks.  Although Big Clyde has some soundness issues, he is relatively comfortable — but he requires a good bit of maintenance and management.  Because he requires a lot of specialized care, and is still quite difficult for the farrier to work on, we feel Big Clyde needs to stay here in our care.

One last point: If you see something, DO and SAY something! This case is a perfect example of people driving by and ignoring the obvious. They were living on a very well-travelled street, and the condition of the barn and fencing was deplorable. Anyone could have seen how bad off these donkeys were! And all it took was one phone call to the animal control officer of that county. Our call was the first call they had received regarding these donkeys and yet, by the condition of their feet, these poor donkeys had been suffering for years! Please put out the effort to research the appropriate animal control authorities in your county, and don’t be afraid to make a call.