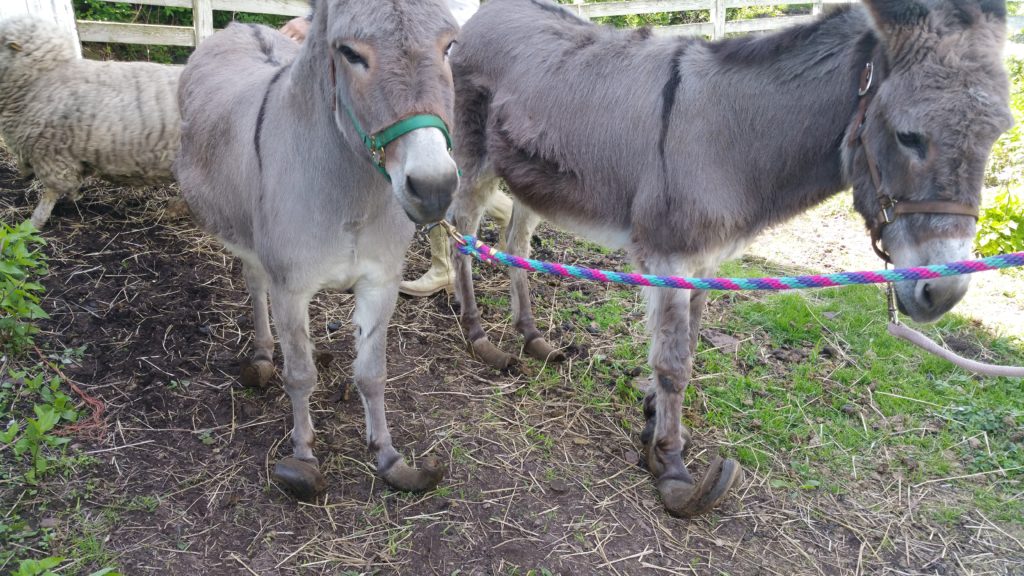 On May 10, 2017, we assisted Bucks County, PA SPCA with the seizure of 3 donkeys who had been severely neglected.  What we saw would shock even the most seasoned rescuer.  Two of the donkeys were a mother/daughter pair who had not had their feet trimmed in at least 10-15 years.  The mother, Josie, was estimated to be in her early 30s.  The daughter, Jenny, was about 11 years old.  Their feet had grown so long that they had become crippling and debilitating.  They were living in a barn that was nearly 3 feet deep in manure and hay, and their access to the outdoors was limited.  Their painful feet made it very difficult for them to walk, or even to lay down and rest.

Although these donkeys had not received necessary hoof care, they were fed and they were friendly.  We brought them to our rescue, and the very next day had our farrier and vet out to begin the process of trimming their painful feet.  After trimming the excess hoof, our vet x-rayed their hooves so we could evaluate the damage to their bones and joints.  The damage was extensive and for Josie, there were a number of issues due to a lifetime of walking in a very unnatural way.  She suffered immeasurable pain for most of her life, and yet, she had an incredible will to live. Jenny had fewer issues, but there was still joint damage from never having had her hooves trimmed.

Our expenses on these three donkeys added up quickly.  Their first full day here cost us over $1500 in veterinary and farrier expenses.  In the following weeks, poor Josie had a number of issues needing veterinary attention.  The third donkey in the group was a little jack named Moses, and he needed to be gelded right away.  The neglect of one owner cost us nearly $3000 in just the first weeks so that we could try to give these three donkeys a chance at a normal life again.

Any reasonable human being can take a look at these hooves and know that this isn’t normal, and that no equine should have to live their entire life with hooves that grow and grow until they become a prison for that animal.  When we domesticate an animal and force them to live in captivity, we are obligated to take care of them by providing clean, fresh water; food; shelter; a clean place to live; and  necessary hoof and veterinary care.  We cannot understand how anyone could have owned these donkeys, fed them, talked to them, and petted them, yet not realized how incredibly painful their feet were becoming over the years.  How could they not see that their feet needed to be trimmed?  How could they not ever call a vet or farrier?  How could they not see the marks where hair was rubbed off  Josie from where she leaned against the gate to try to get some weight off her feet?  How could they not see how incredibly awkward and painful it was for Josie and Jenny to try to figure out what to do with their feet, to try to lay down and get respite from the relentless pain?  How could people visit and see these donkeys for more than 10 years and not say ANYTHING to anyone?

We will never know the answers to all these questions, but we dedicated our efforts to bring these donkeys back to good health, and make sure they will never, ever suffer again.

Within five months of their rescue, Josie and Jenny astounded us with their progress. Josie, who was in her early 30’s, really had the hardest road to recover from their terrible neglect. Their recovery was nothing short of amazing!

As you can imagine, Josie had terrible x-rays, showing severe rotation of her coffin bone, and a fractured coffin bone in one front foot. Shortly after they had their first hoof trim here, Josie colicked, and then suffered a bout of endotoxemia. With the fast response of our wonderful vets, and our round-the-clock care, she somehow managed to pull through. But then she suffered renewed inflammation in her front feet (a common side effect of the endotoxemia). We iced her feet hourly for days, medicated her heavily, and she managed to pull through that too. Then, after just a few days of moderate comfort, she became very lame again, this time because of an abscess in one of her front feet. Again, not a surprise, given the horrible condition of her feet upon arrival. We nursed her through that, and she finally, slowly, began to look like she would actually recover.

Through all of this, Josie never gave up her will to survive, because if she had, we would surely have helped her cross the rainbow bridge. The last thing we ever wanted was for her to suffer any more than she had. But she still had a great appetite and had a spark in her eye. She spent most of her first month here lying down in her stall, which we had bedded in inches of sawdust, topped with over a foot of straw. She lay down probably 22 hours of each day, getting up only to eat, drink and go to the bathroom. She ate a lot of her hay lying down, and, thankfully, she was smart enough to stay down and rest her painful feet. There were definitely times when we weren’t sure if she was ever going to get comfortable on her feet, but she showed us what a miracle she really was.

Not to be overlooked, our farrier did an incredible job trimming her feet. She and Jenny both had an impossible mess to start with, and the first trim was challenging, to say the least. Following the initial trim, he continued trimming them about every 4 weeks, thus encouraging their feet to grow correctly.  Although Josie’s hooves still had a long way to go before they could be considered normal, she was miles ahead of where she was, and – most important – she became much more comfortable.

She and Jenny finally improved enough that we moved them to one of the main pastures to join some other donkeys. They did incredibly well, finally getting to be with other donkeys after spending most of their lives with only each other.  Their new herd included two mamas and babies, and it was very endearing to see the baby donkeys come up to Josie and engage with her.  For her part, Josie seemed to relish the role of “grandmother.”  Josie was a gentle, old girl who never went anywhere fast, but she moved with purpose and finally was able to spend most of her days on her feet. We bedded down their run in the same way, with lots and lots of straw as well as a deep layer of sand, and when she needed to rest, she lay down. But, over time, she chose to spend more and more time on her feet, laying down mostly at night to rest.

We also discovered that the brand on Josie’s neck was a Bureau of Land Management (BLM) brand, and we were able to research her history. She was rounded up in 1985 as a 2 year old in a region in Arizona. She was shipped to an adoption center in PA, where she was adopted. Because we rescued her from a farm in PA, it’s possible that owner was the same person who adopted her. What a shame that this poor donkey was adopted by an uneducated owner who probably never had her feet trimmed!

Jenny, being only 11 years old when rescued, recovered a little faster than her mother did. Thank goodness, her x-rays were much better, and she will be just fine, with a good long life ahead of her. As you can imagine, she was deeply attached to her mother, and we vowed to never separate them as long as Josie was alive.

Rescuing these two girls nearly killed Josie. The stress produced by the move and the enormous changes in her life were incredibly difficult for her. Even though where she was living before was terrible, it was what she knew; such drastic change can still be very hard on an old equine. We quickly decided that Josie would never leave our rescue and that we would care for her for the rest of her life. We owed it to her to make the rest of her life as comfortable and stress-free as possible. She was high maintenance, and we constantly adjusted where she lived to suit her needs and make her feet as comfortable as possible. This meant lots of deliveries of sand, new rubber mats for certain areas, and lots and lots of bedding and straw! We called her the Queen, because she deserved to be treated as one.

Sadly, in May 2019, almost two years to the day since her rescue, Josie’s battle with chronic pain reached a level from which there was no return. We made the very difficult decision to let her go. Although the choice is heartbreaking, euthanasia, too, is a hallmark of responsible ownership.

Josie was an incredible donkey, and to know her was to know and understand the resilience and utter toughness of donkeys.

Jenny is a sweet girl who blossomed into one of our most perfect donkeys.  Just a day after her terribly disfigured hooves were trimmed, Jenny began to trot!  Witnessing her first moments experiencing life outdoors, and walking, trotting and then zooming on grass was exhilarating!  We watched her figure out life beyond the confines of the filthy stall that was her entire previous existence, and quickly saw that she is full of personality and character.  She eagerly made friends with the other donkeys.  Her first best friend was Angie, and later on, she and Angie befriended Daisy Mae.  Jenny’s calm, loving nature greatly influenced both of those girls, who were young, frightened jennies.  This trio is now inseparable!  View The Dodo’s compelling video  telling the remarkable story of Josie and Jenny, two very resilient donkeys.

Moses, Jenny’s sire, was about 14 years old when the Bucks County, PA SPCA called us to assist in the three donkeys’ seizure in May 2017.  Like Josie and Jenny, his feet had never been trimmed.  Moses was still an intact jack then, and because of his restless energy, he’d managed to pace and fret enough in his pen to keep his feet from growing as grotesquely long as Josie’s and Jenny’s.  However, his hooves were still badly overgrown and he had foundered. Though Moses is comfortable and sound now, he always will need to be monitored carefully by someone experienced in recognizing and managing laminitis.

Moses is a fun donkey, with a lot of personality, and he loves to play hard with the other donkeys.  He was gelded shortly after he arrived here, but, because he was gelded later in life, he still loves the ladies!  He gets along with most other geldings, but will not be able to live with any mares or jennies.

Moses eventually buddied up with another gelding, Luke, and they were adopted together in 2019.